20 June is World Refugee Day. It is a salute to the indomitable spirit and courage of the world's refugees. 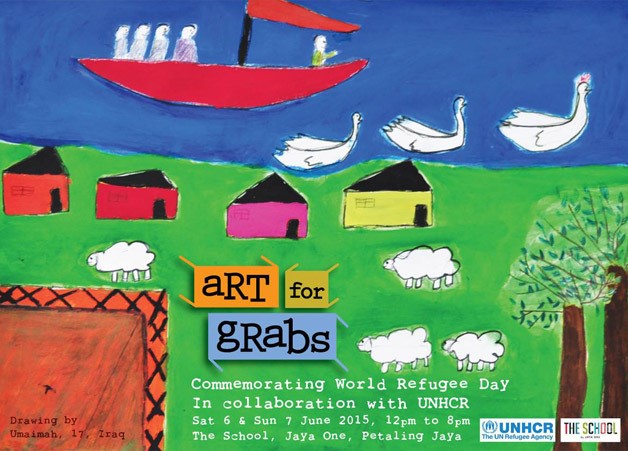 World Refugee Day 2014 puts a human face to the refugee issue, that behind the numbers and statistics are real people with real stories and real dreams and desires for a life of safety.

For the first time ever, World Refugee Day was commemorated in Malaysia through a collaboration between the UN Refugee Agency (UNHCR) and the well-established Malaysian art bazaar initiative "Art For Grabs".

"Art For Grabs: World Refugee Day" combined all the things people have grown to love about Art For Grabs - the stage events, the accessible art bazaar, the community spirit - with refugee art booths and refugee awareness events.

MLD sponsored a booth for a refugee artisan for 2 days - during the World Refugee Day Art 2015 in May 2015.

The Johor Women's League or JEWEL (Pertubuhan Pergerakan Wanita Johor, 2069-09-JHR) is a non-governmental, non-profit Society of women volunteers dedicated to advancing the status of women and children.

JEWEL was established in October 2008 in Johor Bahru, Malaysia. Its membership is multi-racial. JEWEL's primary objectives are:

The following items for door gifts were also sponsored by MLD:

Sisters in Islam (SIS) is a non-profit organization promoting an understanding of Islam that recognises the principles of justice, equality, freedom, and dignity within a democratic nation state.

Dr Care is a practicing andrologist currently providing professional advice related to sexual healthcare matters through ESP brand website - Dr. Care blog. This blog provides an avenue for consumers to pose questions anonymously and the advice given are posted in the blog for others to also gain benefits from it.

The age demography is broad whilst the type of questions posed were diverse as proof that the blog has been well received by consumers as a trusted avenue on sexual healthcare matters.

MLD continued its support to its own employees' children and their families who needed assistance for education and special needs. This was in 2015 mainly in the form of cash assistance as below. MLD has a work force that knows its employer's care goes beyond its own gates.